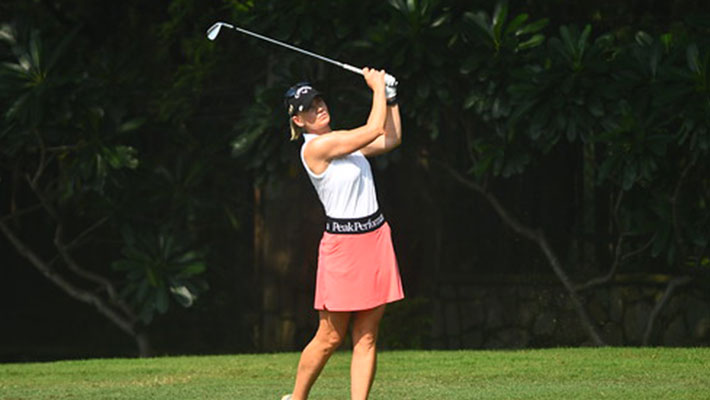 Gurugram, October 20:Linda Wessberg is no stranger to India. The veteran Swede, who has been playing on the Ladies European Tour since 2004, has been to India no less than eight times for the Hero Women’s Indian Open and she has never missed the cut.

Just one shot behind Wessberg was Anais Meyssonnier of France, who holed eight birdies against two bogeys for a 6-under 66 that put her in second place.

India’s Amandeep Drall holed a fifth birdie on the 18th for a bogey-free 67 that put her in tied third place with another India regular, Finland’s Noora Komulainen, who has never missed a cut in her previous five starts in the Hero Women's Indian Open. They both shot 5-under 67 to be tied third on a leaderboard that featured four Nordic players in Top-six.

Tied in the fifth spot were Swedish colleagues Caroline Hedwall, the 2011 champion, and Elin Arvidsson, playing her first full season in LET after some years on the Epson Tour in the US.

While Wessberg bagged a tidy cheque for her ace, it was not the only of the day as Scotland’s Gabrielle MacDonald also had a hole-in-one on the 145-yard 16th, but shot 76.

Wessberg landed the ace on the fifth with the 8-iron finding the cup from the tee from150 yards away. She had six other birdies and one blemish on the Par-4 10th. Wessberg said, “I felt like I wasn't playing great actually, but I gave myself some really good chances and I rolled in some good putts and I took advantage of those. Obviously, the hole-in-one on hole five, which helped the score.” On the hole-in-one, she said, “Well, we couldn’t really see it because we thought it was very close to one of the other girls’ ball. So, just when we walked up, we could pretty much see that.”

The former Solheim Cup star, Wessberg started the day with a birdie on the first and then had a stunning ace on the fifth, followed by a birdie on ninth and she turned in 4- under 32. On the back nine, she dropped a shot on 10th, birdied three in a row from 12th to 14th and added one more on Par-3 16th.

Talking of her season, the 41-year-old Wessberg said, “I haven't had a great year. I've been playing pretty decent but haven't been putting good at all so when you finally see the balls drops in the hole it, it always helps and it's good for the confidence though.”

Amandeep was thrilled, as she said, “I've been playing well of late. I've been hitting well so there were very little errors. I just missed one green on the 17th and I hit it quite close on a couple of holes. I holed two average range putts, the rest were all really close. I was really in my zone. I was really calm and composed, and I was just taking it one shot at a time. And it's three more rounds to go, so it's a long journey ahead. But to have a good start is always helpful.”

She admitted that she had learnt a lot playing a lot on the LET this season, saying, “When you're playing more on the Ladies European Tour, the girls are so good, so you know every shot, it really matters. You know you can't relax on any shot and have to be like 100%.”

Meyssonnier, who has never won but came close at her home Open, the Ladies Open de France with a T-3 in 2021 and T-4 this year, said, “I felt nice about my entire game today. I think I hit 16 greens in regulation and 11 fairways. So from the tee to the green, it was perfect. The only thing that was not so nice today was my chipping. My pitching was good too, I hit a lot of shots near to the pin. It was just a good one with a lot of good shots. Just like play one zone and after you go for the green.”

Wessberg, who has come to India every year from 2010, barring 2015 and 2016, when she juggled her golfing career with raising a young daughter, who is now seven. She said, “I have a 7-year-old daughter and that is always a challenge. But I have really good support from my husband and my parents, so it helps.”