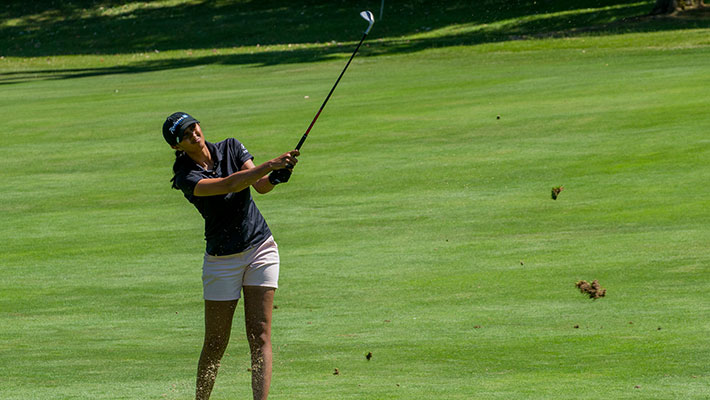 Gurugram, October 19:The home hopes will be pinned on 2016 champion Aditi Ashok at the US$400,000 Hero Women’s Indian Open which tees off at the DLF Golf & Country Club on Thursday.

That is with good reason, for the 24-year-old remains the only Indian to have won the event and who has subsequently been making waves at a global level.

Yet, it is not just Aditi but a bunch of other youngsters who have emerged in recent years and are itching to get a shot at the biggest prize in Indian women’s golf.

Among them are Diksha Dagar, the only Indian woman other than Aditi Ashok to have won on the LET; Tvesa Malik, who was Tied-6th in 2019; Vani Kapoor, who has played and made the cut in every single Hero Women’s Indian Open since 2011 and was tied- 6th in 2017 and Amandeep Drall, who has played steadily this season.

These four plus the likes of Ridhima Dilawari, Neha Tripathi, Gaurika Bishnoi, Pranavi Urs and rookie Sneha SIngh, and the Bakshi sisters, Hitaashee and Jahanvi, are all capable of springing a surprise.

Then there are amateurs like Anika Varma, who was fifth and the best Indian in 2019 and the fast-emerging Avani Prashanth, who played and made the cut at the prestigious Augusta National Women’s Amateur. In short, the home challenge is young and strong and capable of making a big impression on the event, which makes a return after a three-year gap since 2019.

Indians have managed to find a place in the Top-10 eight times in the 13 stagings of the Women’s Indian Open since it began in 2007 and the performances have only been getting stronger.

Ashok, India’s sole representative on the high-profile LPGA Tour in the United States, won the HWIO in her rookie year and then added two more wins – a second one in 2016 and a third in 2017.

A consistent performer every time she has come to the LET from the LPGA, Ashok, also knows there will always be pressure from being a standard-bearer as India’s first winner of the tournament. “I think there's always pressure,” Ashok said. “My first year on the LET, I felt like I had something to prove. I knew that back home, a lot of little girls would be watching.

“I used to come to this event and I wanted to win because I had never seen an Indian girl win. So I feel like that's a big thing to have and girls can see that an Indian has won this event and they can win this and can play on Tour. I'm basically homegrown, If I could reach that level, I think anybody can do it. So yeah, it is pressure, but I feel like it's also an opportunity to motivate youngsters to do the same”, she added.

Also looking for a good week on home turf will be players like Vani Kapoor and Amandeep Drall, who have been on the fringes of full membership on the LET having played a number of tournaments on the tour this season.

In all, 24 Indian professionals and 6 amateurs are in the 114-strong field at the tournament this year, the highest number ever entered.

While Ashok and LET card-holders Diksha Dagar and Tvesa Malik are among the top Indian contenders, others include Pranavi Urs, who has qualified to LPGA Qualifying Series Final stage, and national women’s champion Avani Prashanth.

Tvesa, who had a standout 2021 season but has struggled this year, said on tournament- eve that progressing from the national open onto Europe had been a steep learning curve. “I've learned a lot over the last few years and now I'm coming back here to play again and I'm very excited to play at home, so I'm looking forward to it. There are so many good players on the Ladies European Tour and everyone has their own way of getting it done. At the LET, going there and playing, you realize how you have to learn to conserve your energy and kind of find that confidence within yourself to be able to play and trust your game" said Tvesa.

Building up their confidence ahead of the National Open, were rookie pro Sneha Singh, who topped the field at the LET’s Pre-Qualifying Asia Series last week, Hitaashee Bakshi, Seher Atwal and Neha Tripathi, all of whom are through to LET Final Qualifier in Spain in December.

While MacLaren won the Australian Women’s Classic, Trivino topped the field at the Madrid Ladies Open. Koivisto emerged winner at the Jabra Ladies Open in France and Mora most recently annexed the Aland 100 Ladies Open in Finland.

This sets a high bar for the field and offers home golfers plenty of incentive as a solid performance this week will either help seal next season’s card, or open the door to the 2023 season.