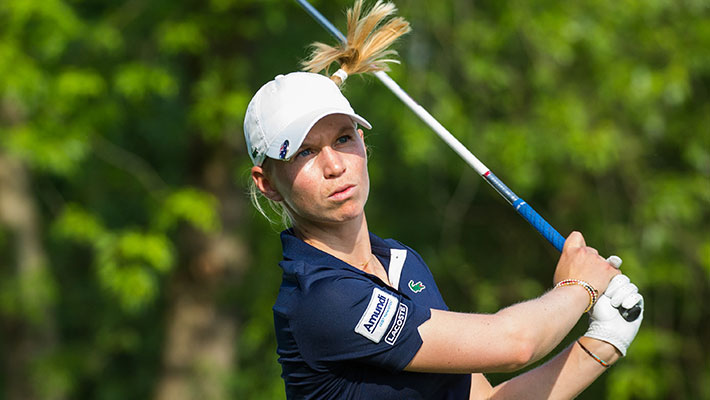 Gurugram, October 13:Six years ago, when Camille Chevalier came to India, all her thoughts centred around having a solid week to ensure that she moved from her rookie status to a better position the following season by keeping her card.

Even after playing 36 holes when she was three shots behind the second round leader, the 23-year-old from Aix-en-Provence in France confessed that she was not even thinking about a win as she teed off in the final round.

Yet she did pull it off with a great back nine at the Hero Women's Indian Open 2017 – in fact she had five birdies in the last nine holes. That grandstand finish saw her grab her maiden LET title one shot ahead of Michele Thompson, who had a record-setting 64 on the second day.

Chevalier is all set to come back to India next week and is looking at the Hero Women’s Indian Open to revive her career graph, which after her maiden win here did take her to the United States, but the Epson Tour in 2018 was as far as she got.

Lately, she has been struggling with her form. The win in India apart, there have been only two other Top-10s – a third place at La Reserva Sotogrande in 2019 and a 10th place at the Andalucia Open de Espana in 2018.

For the last three years, she has been finishing around the 20s with an occasional Top-20 like the T-12 in South Africa last year and T-21 in the Italian Open. But she has been in the Top-10 at the Aramco Team Series events.

However, she craves a solid finish at an individual event that will give her a good finish on the Order of Merit, where she languishes at 114th place currently. She got in the main draw at HWIO 22 courtesy of the sponsors as she is a past champion and needs to use that privilege to find her way back into form and contention.

Back in 2017, Chevalier’s highlight was the brave second shot that came within three feet on the 18th which she birdied for an outright win. With that, Chevalier became the third successive LET rookie and the fourth overall to win the HWIO. Aditi Ashok in 2016, Emily Pedersen in 2015 and Caroline Hedwall in 2011 did it earlier.

Chevalier ended at 12-under 204, while Thomson (71) was 11-under 205 in the 2017 edition of the tournament. The field behind them was star-studded with Carlota Ciganda and Anne van Damm among those who were tied third. Ciganda and Van Damm went on to the LPGA.

Camile started golf at the age of seven, introduced to the game by her parents. Her younger brother Guillaume too plays the game at the University in the United States.

Soon after finishing college, Camille turned pro in January 2017 earning full status at the Lalla Aicha Tour School. She had a highly successful Rookie season, during which she won her first title, the Hero Women’s Indian Open and became the Rookie of the Year. She is now looking to turn the clock back as she readies to tee off next week at the DLF Golf & Country Club for the Hero Women's Indian Open 2022, to be held from October 20-23.