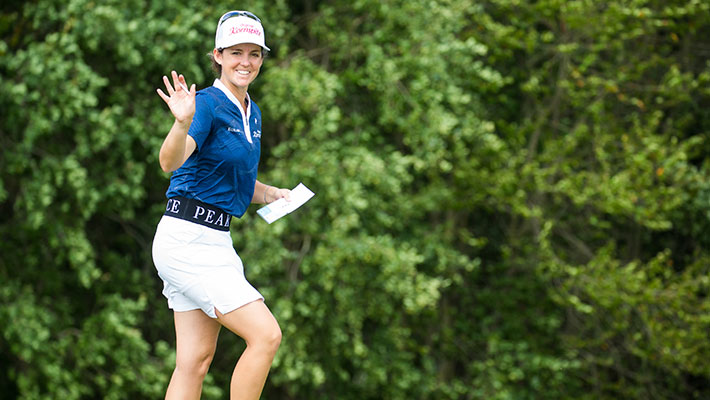 Gurugram, October 18:Christine Wolf is happy to be back at the course where she achieved her finest moment. And India’s own Aditi Ashok is keen on showcasing her global status to her countless followers at home as the Hero Women's Indian Open 2022 gets underway here on Thursday.

As Christine tries to extend her lease over the lovely Hero Women’s Indian Open Trophy, Aditi a three-time LET winner too wants the winning feeling once again at the US $ 400,000 event, which begins on October 20.

Christine said, “It's really nice to be back. I got to hold the title for the last three years, so I enjoyed that. It was very special for me to be back and walk past the 18 again. I'm just very excited to be back." The Austrian jokingly said she ‘paid her respects' to the ‘lake’ on the 18th which thwarted her attempt to win in 2018, but she did conquer it in 2019. She added her caddie never lets her forget her misfortunes at the hole in 2018 when she had a quadruple and a double on the 18th and finished second in 2018.

Aditi Ashok, who won the Hero Women’s Indian Open in her rookie year in 2016, recalled, “I came back to defend it in 2017 (was T-13). That was the last time here, so I am looking forward to it.” She added, “This is actually my ninth week in a row and so I'm a bit tired, I guess a bit jet-lagged. But I'm just going to try and conserve my energy for this week because it is four rounds. I'm used to it being a three-round event! It's like a tough walk out there too, and you need a lot of mental energy to play this golf course. So, I'm just going to try and focus on that so that I have the best physical and mental state for those five hours every day.”

Aditi, who was 14 (in 2012) when she finished T-8 as an amateur, said, “I think as a golfer, obviously I've changed a lot since I last played here in 2017. I think just the level, the skills I have like I felt I had a great short game when I used to play in India and then when I got to the LPGA, I realized everyone has a great short game. So, I had to work at being even better at something that I was already good at and the same with putting, same with driving accuracy and so many other things. I feel like I've made them tighter and so, as a golfer, definitely better.”

She went on, “I'm basically homegrown, I've lived here, and played here all my life. So if I could reach that level, I think anybody can do it. So yeah, it is pressure, but I feel like it's also an opportunity to motivate youngsters to do the same.”

Tvesa Malik, who had an outstanding season in 2021, has struggled in 2022, but knows that a strong finish at her home event will give her enough takeaways for 2023. She said, "I think the first year I came out on the tour, the Hero Women's Indian Open is probably the first experience that I had playing with players from the LET when I was playing full time on the WGAI."

"I'm coming back here to play again and I'm very excited to play at home, so I'm looking forward to it", added Tvesa,

The 2017 champion Camille Chevalier, who spent a few years in the wilderness after the triumph here, revealed her game and mind were both in a better place now, while Meghan MacLaren revealed that this event had become ‘her favourite’.

Chevalier revealed, “I went through a very interesting period after my win here in 2017, through which I learned a lot. I'm actually happy I went through this tough time because I'm now a much wiser person.”

“I worked a lot on my technique so that's why I went through ups and downs. But now I'm starting to digest everything and also I'm back to playing the game because I was working on technique and I lost myself a little bit in there in technique. Now I am really playing with my strengths. I'm really enjoying the game", she said.

Meghan, the sixth-ranked player on the Order of Merit, was happy to be back in India. She said, “This has been an event I've loved ever since I first came in 2017. And I don't know, just somewhere that has always fit my eye and is just very different to anything else we played; the people are so welcoming. I just think it's one of my favourite events of the year and whenever I decided to come back and play the LET this year, this was one of the events that I kind of had circled as somewhere I wanted to be. So, it's living up to expectations so far."

Meghan, who is one of the players, who has often divided her time between playing in the US and Europe, also gave a big thumbs up to the camaraderie on the LET. “It is about being closer to the people you care about and the people who care about you. In the US, it was often just hitting the balls on the range and playing. Here (in Europe) we finish the rounds and sit together, go out for dinner together.

One of the girls, who played on the Epson Tour (in the US) asked me if it was always like this (the camaraderie and going out and so on) and I said yes. I like that and am more comfortable with that.”

Four of the champions of the event that was first held in 2007, are back. The field also includes five champions from the current 2022 season and two from 2021. One of the last few events of the current season, it has also attracted eight of the Top-20 of the LET Order of Merit with the best being Johanna Gustavsson, who was part of the winning team at the Aramco Series – New York last week. The others from the Top-10 are Magdalena Simmermacher (5th), Meghan MacLaren (6th) and Ana Pelaez Trivino (7th).