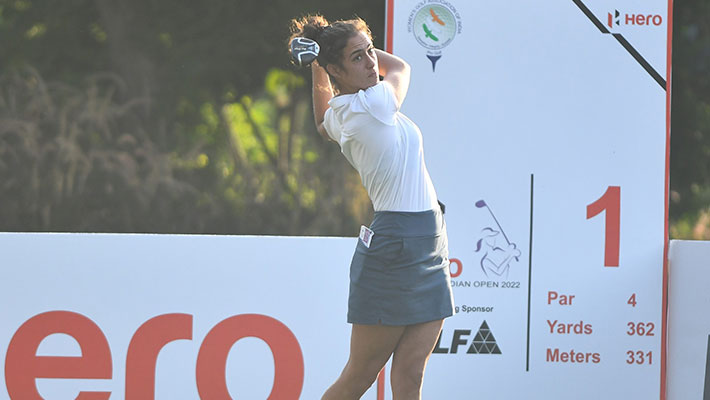 Gurugram, October 21:Sweden’s Elin Arvidsson and Anais Meyssonnier of France share the lead on -6 as we head into the second half of their rounds on the second day of the Hero Women’s Indian Open.

Two early birdies on holes 11 and 13 – after starting on the tenth – saw Arvidsson move into a share of the lead after an opening round of 68 (-4) on Thursday, while Meyssonnier had just a a birdie and bogey apiece to continue where she finished the first round on six-under par.

It was day of mixed luck for the local stars at DLF Golf and Country Club, as Amandeep Drall, the best placed Indian after the first round in T3 on -5, played hide and seek with birdies and bogeys and is now in a share of fourth at the halfway stage.

After a bogey-free opening round, Drall had four birdies and the same number of bogeys in a roller-coaster of a round, with her level-par round of 72 seeing her in T4 alongside the 2011 champion Caroline Hedwall (71) and Noora Komulainen (72). They are all at 5-under.

Meghan MacLaren of England, who is having a fine season with one win in Australia and two runner-up finishes in Italy and France, had the best round of the morning at three-under on a day when the tricky pins meant scoring was harder to come by than on day one.

MacLaren – who shot 72 in the first round, is now 3-under and tied for seventh alongside India’s Aditi Ashok (70-71) and Luna Sobron Galmes of Spain (69-72) – had five birdies against two bogeys, and rose to T7 with the afternoon wave to come.

The English star has often performed well at the Hero Women’s Indian Open, with a third-place finish in 2019 and T9 in 2017 at the same event, and picked up birdies on the fourth, seventh, ninth, 12th and 17th but also dropped shots on third and fifth.

The experienced Wessberg, who had a stunning 7-under first round at the DLF Golf and Country Club, had a good birdie to begin on the tenth but went through a nightmarish stretch of four holes from 11th to 14th as she dropped three shots.

Two successive birdies saw her heading towards the turn back at level-par and in a share of the lead, only for a double-bogey on the 18th to see her drop down the leaderboard.

Amandeep, who logged her first LET Top-10 at Tied-7th in VP Bank Swiss Ladies Open this year, said, “It was very similar to yesterday. Nothing good or bad. I just played to a couple of wrong places and this course is such that if you hit in the wrong places, you end up losing a shot.

“I am happy I managed to hang in there and hopefully, the weekend will be solid.”

2011 champion Hedwall, who also has two runner-up finishes in India in the past, said, “I think I was playing as well as I did yesterday, really. I just didn’t get off to a great start.

“I three-putted on one and missed on the wrong side of the green on 3. But then I got going and made birdies on 7-8-9. I made a long putt on no 7 and then two-putted on 8 for birdie and hit it close on nine. So it was nice to turn that to one-under.”

Home favourite Ashok – who lifted the trophy here in 2016 as an 18-year-old – was left to rue her performance on the greens on day two, with just a single birdie on the seventh in her day alongside 17 pars to head into the clubhouse in T7.

“The good thing was that I stayed bogey free today (second round), but over the two days I must have had at least 10-odd chances from 10 feet on the green and they did not fall. Hopefully, that gets better over the weekend.”

Vani Kapoor (71) kept her record of making the cut each and every time she has played at the HWIO since 2011. She made her 10th cut in as many starts with an action-packed round. Smiling as usual, Vani said, “I had seven birdies but gave away six shots in bogeys, too. So mixed feelings. But I did have a fine finish with three birdies from seventh to ninth as I finished on the front nine. Two more days to make this week better.”

Gaurika Bishnoi, another local hope, was 1-under through 12 and 2-under for the tournament.